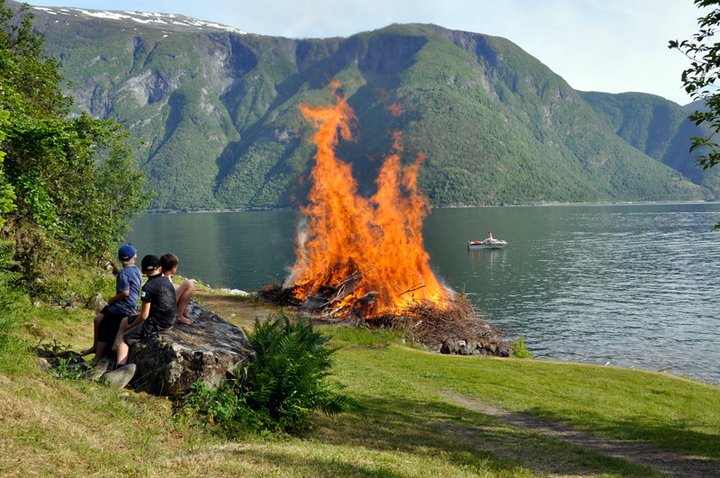 St John‘s Day – is an ancient celebration, that is called Sankthans or Jonsok in Norwegian.

It is commemorated on the 24th of July, but observance begins on the evening of June 23rd. Celebration remembers about St John the Baptist and his role for Christians. Also it is the shortest night of the year. Until 1771 Midsummer’s day was a day off in Norway, some communities still follow this tradition.

Earlier, Jonsok was the most important holiday in Norway. During the celebration, large bonfires were burned, people danced around maypoles and girls made wreaths. Nowadays some people still commemorate St John’s birthday this way, others cook food on a campfire, or arrange overnight trips.

Several interesting Sankthans traditions. How to celebrate in Norway?

Large bonfire is the main symbol of Midsummer’s Eve. It protects from fiends, represents sun and enhances its powers. Bonfires are burnt all over the country, mainly in coastal areas. Their ignition method is unconventional, only flint or sticks can be used.

Sometimes, dolls are fixed on bonfires. They represent old, bad times. During the ritual they are burned and the inconvenient connection with the past is broken. After conversion to Christianity, bonfires were banned in many European countries because they were attributed to paganism.

Maypole maistangens symbolizes Yggdrasil – a central tree that connects nine Worlds. Usually maypole is a cross-shaped wooden pole, with two rings on the sides. It is decorated with flowers and wreaths. People dance around it in order to enhance strength. Southern countries decorate maypole in May, but this is not possible in Norway because the flowers do not bloom until June.

Midsummer’s Eve is considered as magical. In the evening young girls look for seven types of herbs and hide them under the pillow, so that they dream a future husband.

Women make wreaths from flowers. This custom originated centuries ago when wreaths of flowers were a gift for gods in the hope that they will reward fertility.

Children wedding barnebryllup were very popular in Western Norway in 19th century. Children wore bride and groom outfits and gave each other marriage vows as a symbol of new life.

The most popular foods for Midsummer’s Eve are grilled dishes, Norwegian strawberries and rømmegrøten. Children are spoiled with sweets, especially, pancakes with butter and sugar.

The evening of June 23rd brings the shortest night of the year and St John the Baptist’s birthday. Norwegians will celebrate evening by dancing around bonfires and maypoles, telling fortunes and tasting sweet pancakes.